My Vet, Dr. Schroyer, called today to tell my pack that my initial lymph node aspirate taken last Tuesday showed that I had cancer.  Unfortunately, there were not enough cells taken, so I have to go back to the clinic on Monday to have a larger section of my lymph nodes taken. 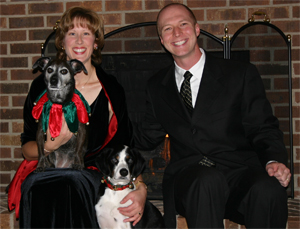 My pack took this news especially hard because I have been feeling much better since I started on antibiotics last Tuesday.  My breathing has been normal and I had been spending the morning begging for (well, maybe demanding) some of the Christmas cookies they were baking.   Also, last Wednesday, the results from my blood work were reported to my boss man and they were promising.  They told me that they were upset because they didn't want me to be sick and that I was over due for some good luck.  I guess I'm still over due.