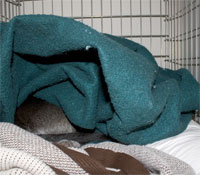 Today started out like so many other days.  I was a little tired after breakfast so I decided to take a little nap.  Naps are good.

Instead of going to one of my usual napping spots, I decided to check out an old favorite-my kennel.  Well, as you can see, I was quite comfy and didn't really want to be disturbed. 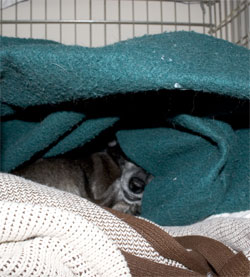 Well, let me just say, I love my boss man with all of my heart, but he does have (at least) one flaw.  When he sees a snuggly, sleepy Little Bit, he just can't seem to help himself.  Not only does he want to pet me with his ICE COLD HANDS (doesn't he realize I'm undercover for a reason?), but he insists on repeatedly using the "flashy thing."   I don't really know what a dog needs to do around here to get a decent nap sometimes...  But sometimes he comes bearing Pop Tarts, so I can't really be mad at him. 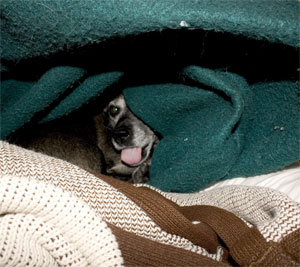 So then after nap time, I noticed that the scheduled walk for today was going to be at 11:00 am EST.  This was a good idea because it was a little warmer, plus, it was early enough so that I could get home before lunch.  I hate nothing more than late meals you know.

So we head off just as the sun starts to peak out from behind the clouds.  I'm thinking to myself, this could turn out to be a pretty good walk.  Well, we are going along and I'm taking the time to sniff the sniffs.  So far, so good.  We get onto the green space and go for a little ways when all of a sudden, guess who just happens to walk out from between two houses.  A little hint, neither house was their house.

So, anyways, here is my arch nemesis Pudding!  It goes without saying that I gave them the what for.   Lyle was so surprised by their arrival at a place where they have never been seen before, that he didn't make a peep.  I couldn't believe it.

So I didn't get to properly follow through with my investigation (the boss man can be in such a hurry sometimes), but I have an idea where she was going.  I think that she was going to a secret meeting of the D.A.W.G. Pound (Dogs Against Wholesome Goodness a.k.a. Dogs Against Little Bit but that doesn't make as good of an acronym).    I think she was going to meet Ron to hatch their next evil plan against the Bit.

So, that brings me to my next request.  Now, in addition to a body guard, I'm looking to hire a spy to infiltrate the D.A.W.G. Pound.   If you are interested, send me a pmail.

I'll bark at you later.